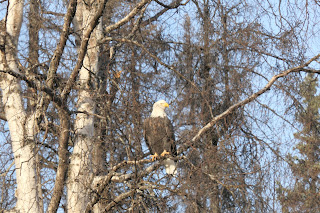 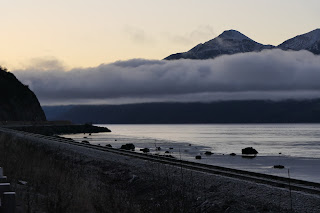 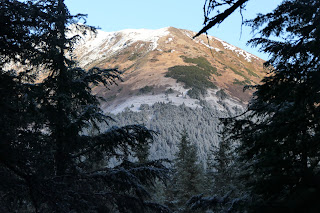 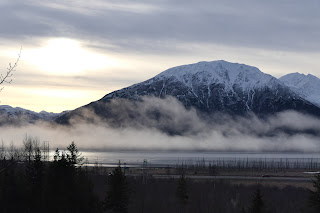 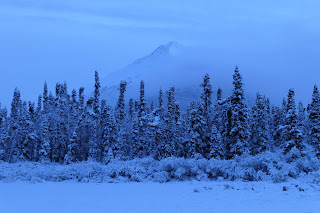 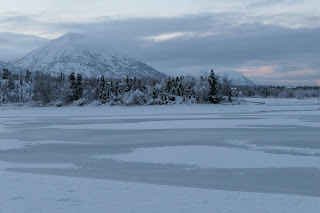 I am behind on posting but wanted to add a few.  Got 5-6 inches of snow at the Park and is currently snowing here in Anchorage.  Hoping to get out and fly the coastline Friday or early next week.

Posted by Time Outdoors at 11:19 AM No comments: 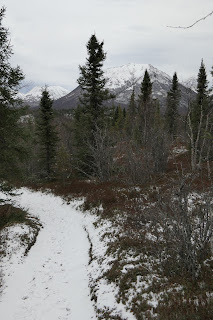 I was told the trail wasn't really used much this time of the year so I was surprised by all of the tracks and just figured a group had gone in before me. 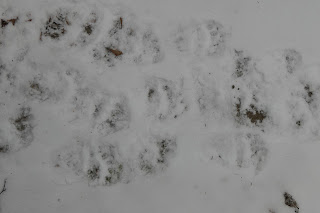 Then I paid better attention to the tracks in the snow.  These weren't hikers.  It was about this time that I questioned my decision to not  bring the bear spray along with me. 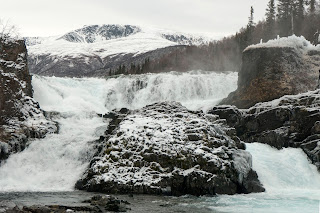 I hadn't planned on going all the way to the falls when I started my trip, but it was a pretty nice and peaceful walk and I had a few hours to spare. I hiked a little pass the trail, explored the area, and headed back to get a few more things done before the sunset. 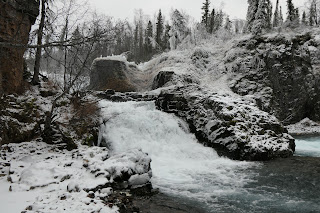 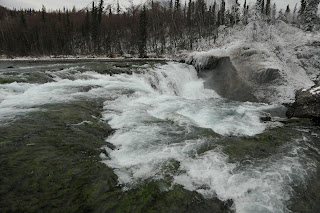 Posted by Time Outdoors at 10:14 AM No comments:

First Trip to the Park 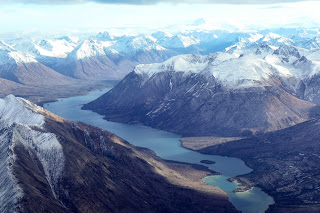 Lake Contrashibuna
The lake has a large waterfall downstream that prevent the salmon and trout from migrating upstream to the lake so from what I understand the primary species are lake trout and artic char.  One local guide says it's the one place that he takes his guest to where they stop fishing, sit down and just take in the beauty of the clear lake surrounded by the mountain vistas.  ﻿ 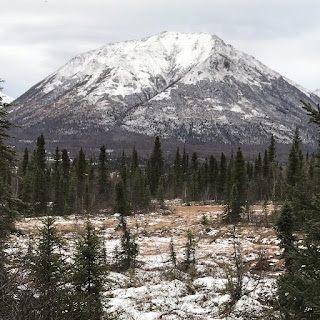 Views like this are pretty common hiking around the Park.  Supposedly in the spring and summer you can see Dall Sheep along the ridges, but it was hard to sport them in the snow. 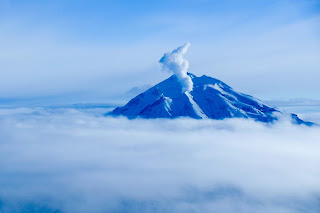 Mount Redoubt
This is one of two active volcanoes I have had the opportunity to fly by during my visit.  The last eruption was in 2009.  It had a major eruption in 1989 that ended up being the second most costly eruption in US history.

Posted by Time Outdoors at 9:51 AM No comments: 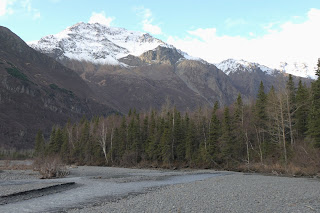 I arrived in Alaska on Monday and have been getting into the office early and working late most days so I have not really had a chance to get and explore until this weekend.  I stopped by the Eagle River Outdoor Center grabbed a trail map, bought a few guides and got some recommendations from the very helpful staff.   It was a little chilly starting off but at about mile 2 when I was passed by a group of hikers carrying packrafts I suddenly didn't feel near as chilled.  I caught up with them at Echo bend where they were inflating their kayaks and gearing up. 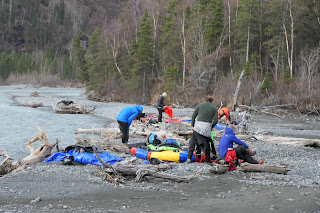 ﻿
Back on the trail and I am maybe 100 yards upstream of the rafters and I see something out of the corner of my eye leaving the river going into the hemlocks. Even though I only got a glimpse of it before it entered the hemlocks I was pretty sure it was a bear.  Sure enough it comes out of the hemlocks and is in a slow gallup right towards me.  I say hey bear and it stops, stands on it's rear legs looking around.  I wave so it can see me and it turns and eases off the trail away from the river.  I wait a couple of minutes to give it time to clear out and then back to hiking.  About a mile later I come to a nice overlook above the river. 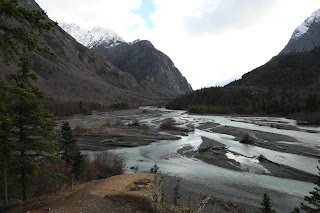 Headed on up to my campsite at Icicle Creek.  SEtup my tent, explored the area, watched two dall sheep playing on the mountain behind me.   Crawled into my tent and read till I fell asleep.  Early in the morning I work to rain falling on the tent.   Turned my light on to check out my new tent and everything was dry so lights off and back to sleep.  I wake up at daylight (9am) crawl out and the rain is starting to turn into snow. 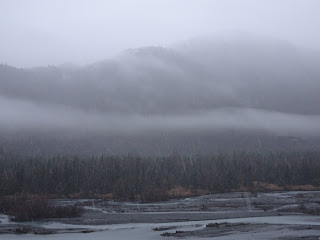 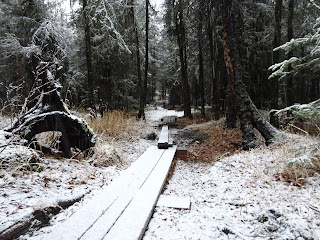 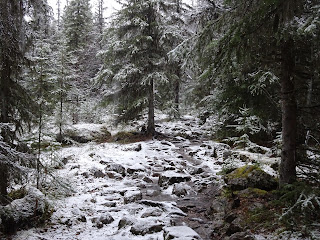 I will try to post more photos from the trip this week.  Now I am off to make chilli (canned) and dry out my gear before I pack it tonight for a trip out tomorrow (weather depending) to the Park.﻿
﻿
﻿
﻿

Posted by Time Outdoors at 7:05 PM No comments: 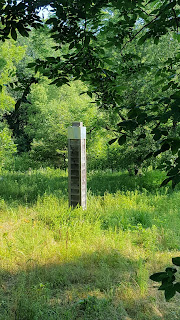 The chimney swift is on the list of top ten birds in decline.  Part of the reason is because people are moving towards gas fireplaces and are starting to cover their chimneys.  The other reason, is because there are fewer old dead hollow trees since most people cut their timber before they reach that age.

I was visiting a local Audubon Center recently and was surprised by all of the chimney swifts I saw.  I knew they had installed Chimney Swift Towers over the last 5 years to provide more nesting habitat for the chimney swifts, but I really did not expect to see as many as I did.  During the nesting phase, regardless of the size of the tower, there will only be one nest.   During the fall migration a tower the size of the one shown in the photo might hold 200 birds.  Some of the old industrial smokestacks in abandoned mills might hold 3000 plus.  I have not built a tower on my property yet, but I do plan to build one in the next year or so.  I mainly have to determine where I want to put it.  These birds eat about half their weight per day in insects so if you are having issues with mosquitos, etc why not try a chimney swift tower?   I will update this blog with my plans when I complete them.

Chimney Swifts migrate as far south as Ecuador in the Winter and as for North as Canada during the summer.

Time Outdoors
I enjoy photography, the outdoors, and inspirational stories. I am looking forward to getting to know each of you better and I hope you enjoy my blog. Thanks